WEMC are excited to introduce this guest blog post, written by Kit Marie Rackley (they/she). Kit Marie is a freelance educator, author, science communicator and teacher trainer with experience working in the climate science sector. They are a consultant to the Geographical Association and the National Association of School-Based Teacher Trainers (NASBTT). Kit Marie’s work can be found at Geogramblings.

This article will look at climate data visualisations and geographical information systems (GIS) tools that are aimed towards high school and sixth form teachers. To find out more about climate services that are not primarily aimed towards higher education teachers, and are instead offer powerful learning potential direct from authoritative sources, click here.

Educators at the secondary phase of education, particularly in the subject areas of Science and Geography, are embracing the use of robust climate data and visualisations from authoritative sources, with some even going so far as to use climate services that aren’t designed for school-use within their teaching. In 2019, I wrote an article for a journal popular with secondary Geography educators defining what is meant by climate services and giving examples of how they could be used in a high-school setting – some of which I will revisit and take a fresh look here. The article and other case studies have been cited to demonstrate that an increasing number of educators are using similar tools in their teaching to ensure the data being using is robust and from authoritative sources.

While many teachers are confident and creative enough to take tools not designed for them like the climate service examples above, and generate their own learning resources based on them, there a few examples which are designed with educational use in mind. These tools also use authoritative climate data but the expertise of the developers and their collaboration with teachers ensure that they are not only accessible to a younger audience, but allow teachers to continue being creative with how they use them.

Esri are a well-known global developer of geographical information systems (GIS). Their UK & Ireland branch have a dedicated education team which support schools, including offering their wonderful ‘ArcGIS for Schools’ platform for free. Esri UK have teamed up with The Met Office to produce a series of GIS story maps demonstrating climate change in the UK, impacts and adaptation. A story map is a webpage that you scroll from top to bottom, taking you through an interactive narrative. As the name suggests, these interactive elements are often GIS maps. The combination of Esri UK’s GIS expertise, and the authoratitive and robust climate data based on research from The Met Office has resulted in a series of story maps that can be used as-is for learning, either directed by the teacher or explored by students themselves. There are plans to develop ‘off the shelf’ learning resources and worksheets in the near future.

It is strongly recommended that you take a look at the story maps yourselves, such is the depth and breadth of what is on offer. Here, I’ll take a look at just one example from the ‘Transport and Climate’ page in the ‘Impacts and Adaptations’ story map (Figure 1).

The data which informs the ‘Railway Adverse Weather Days Per Year’ maps is sourced from the Hadley Centre HadGEM3 climate model projections, which have undergone extensive analysis and peer review. ‘Railway adverse weather days’ are defined as the mean number of days per year where the maximum temperature is above 25°C, or the minimum below -3°C, or daily rainfall is greater than 40mm, or snow-depth is greater than 50mm. These weather conditions have been judged to be problematic for rail travel. High air temperatures can cause heating of the steel tracks, increasing the risk of buckling. Overhead powerlines can sag and cause issues for power transition to trains. Freezing temperatures and snow can cause tracks to ice up, causing delays. High levels of rainfall increase the chance of surface water flooding – 596 railway stations and 3,544km of rain network is at risk from this. Heavy rain can also cause landslides and subsidence in hilly areas, with the failing slopes covering roads and railways. The interactive modules clearly show that the number of days per year where the conditions are ‘adverse’ to rail travel is increasing across the UK, but also that this pattern is not uniform. The networks which include London as a hub is a particular problem area especially since there are millions of journeys taken on those systems every day.

Learning about and investigating the link between climate change and different sectors such as transport is part of many syllabuses in UK and European Geography syllabuses in particular. Those syllabuses also challenge students to think about how technology can be used and people’s lifestyles changed to reduce impacts. Tools such as the Esri UK story maps provide a wealth of high-quality visual outputs based on robust climate data to aid this learning and exploration.

Increasingly, science and research-based organisations such as The Met Office have dedicated teams working on educational outreach and material, using their research outputs. A set of materials for students to work on their Maths and Science can be found on their website, for instance.

Digimap for Schools is an online subscription tool which allows schools licenced digital access to many different map layers including the full suite of British Ordnance Survey maps. The interface is very user friendly and the tools simple to use that it can be used by children of primary-school age as well as be powerful enough for deeper spatial analysis by older students. A few months ago, EDINA, the operators of Digimap for Schools, added a new ‘world climate’ layer (Figure 2). 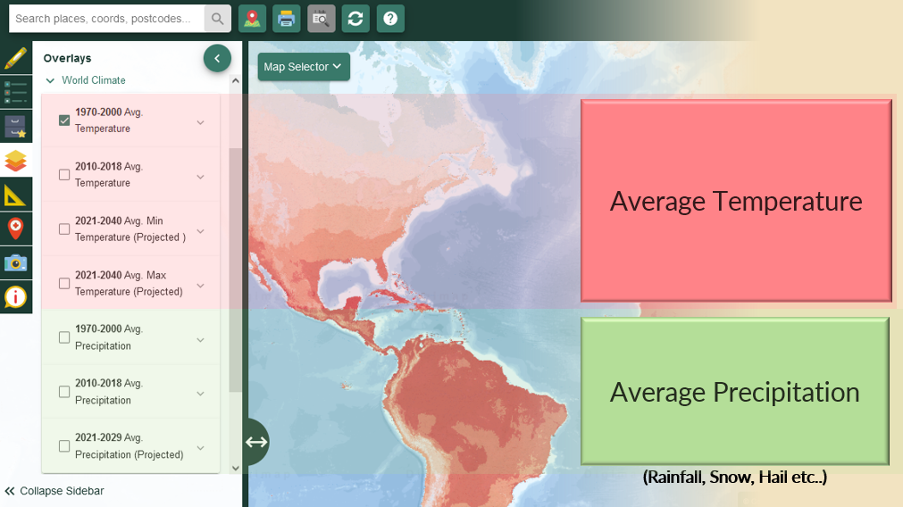 The data that makes up comes from a range of reliable sources from WorldClim and reviewed in the International Journal of Climatology. There are seven layers. Four display average global temperature in the ‘near past’ (1970-2000), ‘recent’ (2010-2018), ‘near future’ (2021-2040) minimums and maximums. Three display average precipitation also in those timescales. The projections are based on ‘middle of the road’ climate changes of a global warming of 2.1 to 3.5°C by 2100, which arguably is what the world is heading for the way things are going!

All students need to do is turn on or off layers, or adjust the transparency of layers to explore the global patterns of temperature or precipitation. Some investigation work can take place such as looking at where in the world the average temperatures might switch from below or around freezing, to just above freezing (Figure 3). 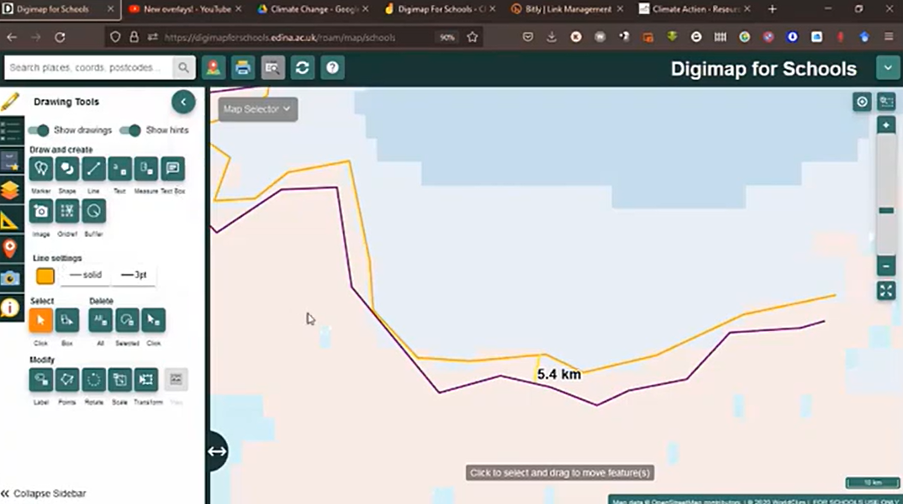 FIGURE 3 – USING THE LINE DRAWING TOOL TO TRACE THE BOUNDARIES BETWEEN TWO TEMPERATURE PLOTS IN GREENLAND, SWITCHING TO A PROJECTION MAP TO SEE HOW THAT ISOTHERM MAY SHIFT DUE TO CLIMATE CHANGE USING THE MEASUREMENT TOOL. (SOURCE: EDINA/KIT RACKLEY.)

Utilising other layers on the tools can allow for the investigation of patterns between them. For example, using the global biome layer students can the transparency function to switch to and from a climate layer to see how those biomes relate to the climate. And then when looking at the projections of temperature and precipitation, could there be any biomes which would see changes to a climate that doesn’t suit them? Students can see the potential ‘poleward’ shift for themselves which can lead to deeper discussions about what impacts this might have on ecosystems and human systems that rely on them. Another layer that is useful to compare with the climate layers is population density. Zooming in on areas of high density, such as Bangladesh, and seeing the increase in heat and rainfall is an indication that many people in that part of the world will be at increased risk of heatwaves and flooding.

WEMC’s Teal Tool is an ‘educational evolution’ of a climate service developed for educational purposes. It is specifically designed to raise awareness about our changing climate using robust climate data such as ERA5 to display temperature, wind speeds, precipitation, solar radiation and carbon emissions across the globe. Both the spatial and temporal scales are changeable, allowing the comparisons between regions within countries, seasons or even months.

Teal has its origins in the comprehensive ECEM Demonstrator tool and the award-winning C3S Climate & Energy Education Demonstrator. I’m excited to see the further evolution of Teal and its educational applications (Figure 4). 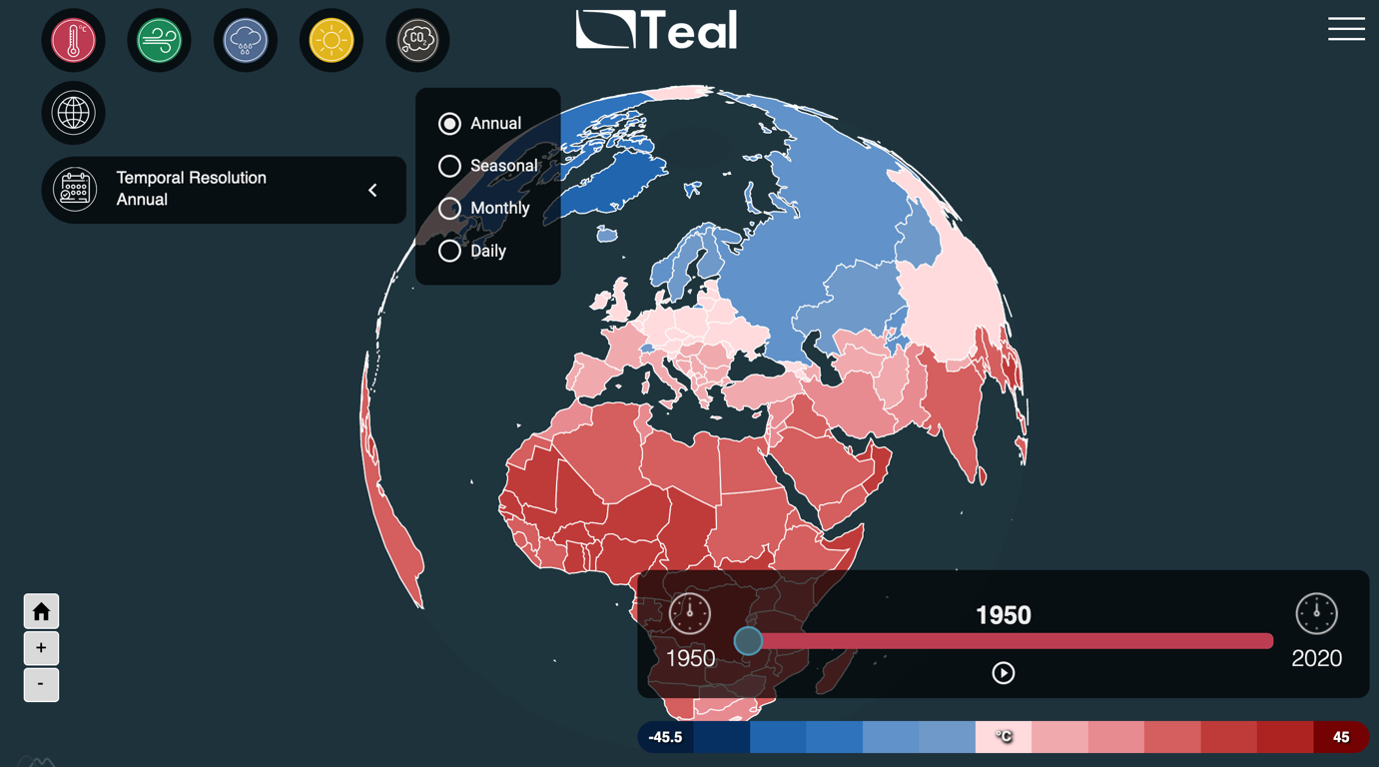 From the point of view as an ex-teacher, what becomes apparent from this article is that ‘climate services’ are fundamentally GIS and ‘interactive maps’, and so teachers already use numerous such applications already, often extensively. The examples given here may be quite complex GIS applications when you go in depth; but the creativity and resourcefulness of the teacher, plus the teaching ideas suggested proves that this doesn’t matter. And even so, agencies and organisations who involved in the creation of such services are now developing similar tools with an educational purpose and school students in mind. The result are exceptionally powerful tools and which can cover a number of content and skill requirements, allowing our young people to get to grips with the same information that the expert use to conduct life-changing research. Isn’t that something!

To find out more about climate data visualisations and geographical information systems (GIS) tools that are aimed towards high school and sixth form teachers, click here. 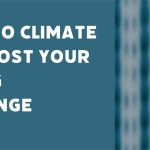 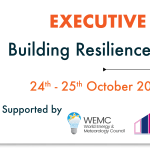