How Design Can Help Climate Data to Come Alive: Behind the Scenes of Teal Tool’s Design

Elena Bertocco is the Head of Communications, Branding and Design at the World Energy and Meteorology Council (WEMC): the founder of Teal Tool. Elena works to apply the brand identity of WEMC to the design of any infographics, visuals, videos, and to the WEMC website, as well as material design for events/projects such as the International Conference of Energy and Meteorology and the EU H2020 SECLI-FIRM project. Her design expertise and creativity can be traced back to her work in the fashion design industry in Italy for over 10 years, as well as her BA in the History of Art and Architecture and her position as a creative workshop coordinator at the National Gallery of Australia.

Importantly, Elena’s aim in her work is to bring structure and clarity to the technical and scientific information that WEMC produces, in an artistic and innovative way:

“Design is not just making something look pretty, it creates solutions and aids in communicating those solutions to people through impactful visuals.”

WEMCs Teal Tool is a development of the C3S Climate and Energy Education Demonstrator, or ‘Edu Demo’ for short, and the meticulous design of Teal Tool is a result of Elena’s dedication to create impactful visuals for environmental education.

Teal Tool was launched to raise awareness about our changing climate, to ensure global historical climate and carbon emissions data is accessible, easily visualised and understood. As the main visual designer of Teal Tool, Elena was determined to ensure that the design of the tool was distinctive, appealing, and modern in order to attract non-technical and non-scientific audiences. Often, climate visualisation tools can be overwhelming, with information included that are not useful to this particular audience. Elena wanted the design to be simple, to therefore remove the fear of climate data and allow users to better understand how to use it to their advantage.

The teal background colour of the Teal Tool start up page gives the tool its name. During the design process, the back-end team accidentally sent Elena a mock-up of the start-up screen with the Teal background covering the ocean areas of the globe. However, Elena was actually in favour of this mistake as she thought it was a more modern way to display the globe and allows the user to focus on the actual climate data (figure 1).

The icons at the top of the start-up page (figure 1) were created with the simplicity element in mind. Elena selected a bold colour for each icon, along with clear symbols for the user to easily identify which climate variable they would like to investigate.

Elena also used her creative mindset to design the Teal Tool logo. The logo actually depicts the corners of the graphs that can be created using the tool, such as in figure 2. This is the main function of Teal that enables the user to develop their climate data knowledge, therefore Elena thought it was important that this was embedded within the visuals of Teal Tool. 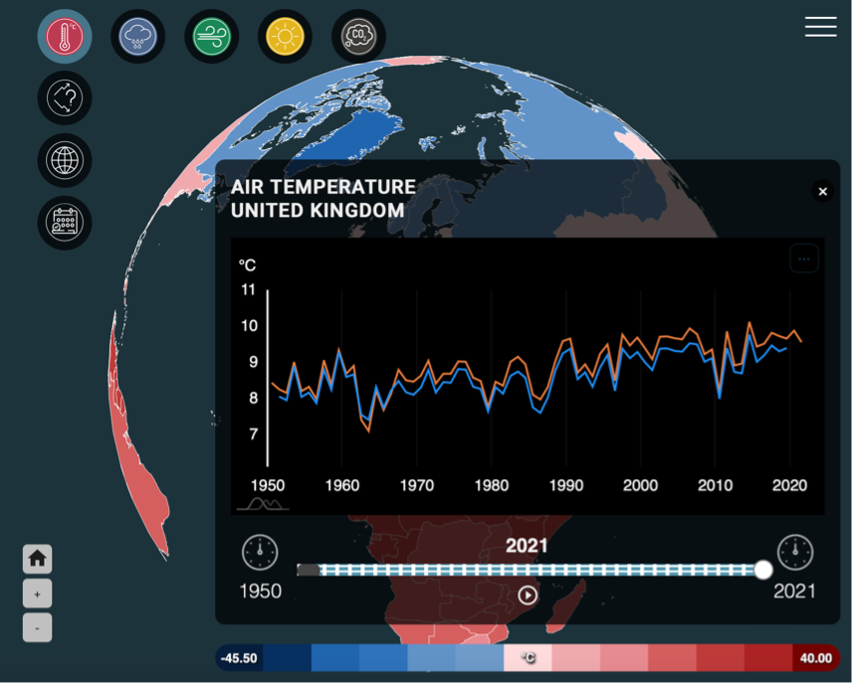 Alongside the visual design development of Teal Tool, Elena has also developed the advertising visuals for the tool. For example, Elena designed the storyboards for the following two Teal Tool videos and continued to have her aims in mind throughout the directing process.

Overall, Elena’s creative and skilful work has been critical in bringing Teal Tool to life and making it accessible for all audiences. We are confident that Elena’s innovative perspective on visual design paired with WEMCs technical team composed of scientists, data engineers and software developers will contribute to exciting updates to Teal in the future. WEMC are delighted to share Teal Tool with you and are excited to see how the tool can help you in your climate education.

climate data, climate science, creative, design, Teal
How Design Can Help Climate Data to Come Alive: Behind the Scenes of Teal Tool’s Design2022-09-272022-09-27https://www.wemcouncil.org/wp/wp-content/uploads/2021/04/stickyheader_sml.pngWEMChttps://www.wemcouncil.org/wp/wp-content/uploads/2022/08/elena-teal-blog2x-100-scaled.jpg200px200px
Recommended Posts
Latest Tweets
Tweets by @WEMCouncil
Follow us on Social Media
Subscribe to the WEMC newsletter
Sign up to find more about our project, research and upcoming events.