The C3S Climate & Energy Education Demonstrator (C3S Edu Demo) aims to inform, raise awareness and provide data about climate change and related energy issues. A key objective of the C3S Edu Demo is to enhance user experience, to allow students and teachers to seamlessly navigate through the various options. The C3S Edu Demo is being designed to be integrated with and to complement  existing school curricula, including the International Baccalaureate.

The first C3S Edu Demo Users Workshop is on Monday 27th January at 12-2pm UTC. For more details and to sign up: click here.

This work is supported by the Copernicus Climate Change Service (C3S), a programme being implemented by the European Centre for Medium Range Weather Forecasts (ECMWF) on behalf of the European Commission.

TRY IT OUT
Resources

Click on an icon below to download a factsheet for that variable, containing definitions, fun facts, a glossary and more!

The following climate variables can be selected via the Edu Demo: air temperature, wind speed (at 10m height), total precipitation and solar radiation. These are chosen both for their importance as climatic indicators, but also because the are the main factors affecting the energy variables displayed with the Edu Demo.

Air temperature is the main indicator of how the climate evolves. It is linked to electricity demand, and can also affect solar power production.

Wind speed provides an indication of the strength of the atmospheric circulation. It is also linked to wind power production.

Precipitation provides an indication of how wet or dry the earth system is. It is also linked to hydroelectric production (the latter is not currently available on the Edu Demo).

Solar radiation is the amount of energy coming from the sun that reaches the ground. It is also linked to solar power production.

The following energy variables can be selected via the Edu Demo:

Electricity demand is what the electricity system needs to produce in order to keep the lights on.

This video explores the pattern of solar radiation across Europe, how it changes throughout the year, and why these patterns exist.

A demonstration of the C3S Climate & Energy Education Demonstrator application tool. This video gives you a whistle-stop tour of the tool’s key features, capabilities and functions. It also provides an example of how to use the tool in an educational setting, using a enquiry question. 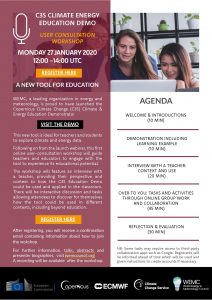 Explore the tool in further depth and help us develop it to its full potential from the comfort of your own home or workplace. This first online user-consultation workshop will guide teachers and educators to engage with the tool to experience its educational potential.

The workshop will feature an interview with a teacher, providing their perspective and context to how the C3S Education Demo could be used and applied in the classroom. There will be interactive discussion and tasks allowing attendees to discover for themselves how the tool could be used in different contexts, including beyond education, which will include the opportunity to reflect and evaluate helping us to ensure the tool has a sustainable legacy as an educational resource.

Register for the workshop here

This workshop allows you to explore powerful interactive climate services designed for industry but useful for the classroom. It will also introduce a brand new free, online interactive tool to explore climate and energy data designed for educational use in consultation with teachers and experts thanks to funding from the European Commission through the ECMWF Copernicus Climate Change Service (C3S).

Part of the Geographical Association (GA) Conference 2020 programme at the University of Surrey, Guildford. Room 32MS01. See https://sched.co/YaiL for scheduling details from the GA. Registration for the conference necessary.

The launch of the new exciting educational tool to explore climate and energy data. The full agenda and line-up can be found on the event page.

ABSOLUTE AIR TEMPERATURE The actual number of a given measurement from zero (0): “The thermometer says the temperature is 14.3°C”

AIR PRESSURE The ‘weight’ of air molecules that press down on the Earth. As air warms it becomes lighter and less dense. This is called ‘low’ pressure and often gives you windy, unsettled weather. ‘High’ pressure tends to give you calm, settled and sunny weather.

ANOMALY The difference between what you would expect based on an average of past readings and what was recorded: “December 2010 in Germany was 5.61°C colder than the average over the 30 years before”

DROUGHT Can be defined as a prolonged period of below average rainfall which usually leads to a shortage of water: “The drought in the south-east of the United Kingdom has forced the government to issue a hose-pipe ban”

ELECTRICITY CONSUMPTION How much electricity has been consumed over a period of time. If you used your 50W laptop for two hours, it will consume 100 watt hours (50×2) of electricity. It is this measure that energy companies use to work out your household energy bill.

FLASH FLOODING When a large amount of precipitation falls during a short space of time leading to a flood which comes very quickly after the storm: “A month’s worth of rain fell in 2 hours causing flash flooding and mudslides.”

LONG-TERM MEAN An average that has been taken over a long period of time, usually 30 years or so. For example, Spain’s June solar radiation long-term mean for the years 1981 to 2010 was 305W/m2.

MONTHLY RAINFALL The amount of rainfall recorded in one month. Rainfall can be recorded over any time period, such as a day or a year: “79mm of rain fell in October this year”

PEAK ELECTRICITY DEMAND The period of time where the highest amount of electricity is demanded from the energy grid. In most European countries, for homes, this is in the afternoon when everyone gets home from work and starts cooking dinner and turning on things like the TV!

SEASONAL Something that changes as the seasons (Spring, Summer, Autumn & Winter) change. Solar radiation, and so the heat and light a place gets from the sun, can be much less in the winter than in the summer, for example.

STORM SURGE A rise in sea level due to very low air pressure and strong winds. Storm surges can be very destructive to coastlines that are in their path. One of the most devastating storm surges to hit Europe was in 1953, causing damage and loss of life along the North Sea coastlines of the UK, Belgium and Netherlands.

VARIABLE WIND Wind speed and direction can change quickly. There may be a sudden gust, which is a burst of high wind speed, for example. When a low-pressure weather system, called a depression, passes over you, winds may get faster or slower, and can change direction in a matter of hours even minutes.

Downloading map data currently produces a .csv file where the countries and sub-divisions are labelled by a code. Please see below for a reference sheet that allows you to identify the spatial areas.

We want your feedback on the C3S Edu Demo!

Please share opinions, feature requests and bug reports using our contact form below, or by using the feedback tab on the Edu Demo. All responses help us improve and develop this exciting new tool.

For more information about the C3S Education Demonstrator and the opportunities surrounding the project, please contact us via the form below.

Where to find us
© World Energy and Meteorology Council (WEMC) 2016. WEMC is a Company Limited By Guarantee, registered in England & Wales in November 2015, No. 9889302. All Rights Reserved
We use cookies to ensure that we give you the best experience on our website. If you continue to use this site we will assume that you are happy with it.Ok