A fruitful collaboration amongst Ms Linh Ho, Dr Laurent Dubus, Dr Matteo De Felice and Prof. Alberto Troccoli has led to a stimulating publication which shows how a simple statistical model provides a reconstruction of what hydro power could have been in Europe over the past 40 years, considering climate variability.

The Copernicus Climate Change Service for the Energy Sector (C3SE) contract, led by Prof. Alberto Troccoli at WEMC, is producing a rich climate and energy dataset for Europe which allows to assess the role of climate on electricity generation and demand in Europe, over different time horizons, from historical, to seasonal forecast to long-term decadal planning.

As part of C3SE, we have developed an approach to reconstruct multidecadal country-aggregated hydro power generation for 12 countries in Europe. The study has just been published in the Energies journal, in a special issue on Applications of Artificial Intelligence in Renewable Energy. 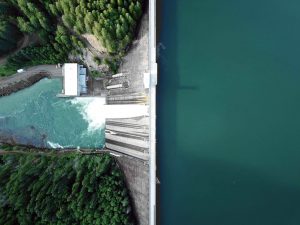 Hydro power can provide a source of dispatchable low-carbon electricity and a storage solution in a climate-dependent energy mix with high shares of wind and solar production. Therefore, understanding the effect climate has on hydro power generation is critical to ensure a stable energy supply, particularly at a continental scale.

“The goal of this study was to provide a simple approach to reconstruct what hydro power generation from reservoirs and run-of-river back to the early 1980s, at country level, using publicly available power generation data which are available only for the past five years. The idea is to isolate the effect of climate variability on electricity generation on such a long period, everything else being equal.”
Ms Linh Ho,  first author of the study

Initially, we aimed at building a EU database of hydro power plants, with their characteristics, and combine this with river flow data in order to calculate the potential generation from hydro power at country level. However, neither a plants database nor the river flow data was available at the necessary scale when the project started.

A replicable model, if hydro power generation data is available

First developed by Dr Matteo De Felice in the C3S ECEM proof of concept project, the model was further improved in the C3SE contract, and can now be adapted to any location in the World. The main constraint is that good hydro power generation data is available, on a long enough period, to train and validate each individual model. Here we worked with the ENTSOE Transparency Platform data, going back to January 2015. We estimate that 5 years of daily data is the minimum to get robust model parameters, but of course the longer the training dataset, the better the results.

“One of the lessons of this work, and of the C3SE developments as a whole, is that the availability and quality of energy data, including metadata, is essential. More coordination is needed between the energy sector and climate impacts modelers to ensure the necessary data are available for energy systems modelling”
Dr Laurent Dubus, one of the authors of the  study

A simple yet efficient approach

Dr Matteo De Felice, now at the Joint Research Center of the European Commission  in Petten, Netherlands, developed a very simple approach, which proved to be very efficient, and accurate enough for our goal: it consists in modelling country level hydro power generation from both reservoirs and run-of-river simply using a machine learning model, Random Forest, at the country level and feeding it with temperature and precipitation from the ECMWF ERA5 climate reanalysis as predictors. 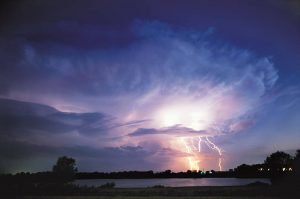 The clever idea is to use also delayed temperature and precipitation data, that we call lagged variables. Hydro power production at a given time is indeed the result of concomitant temperature and precipitation, but also of the recent past of these variables as they contain the memory of the physical system. For instance, in early spring, the time sequence of temperature is critical in determining the phasing of snow melting in mountainous areas.

A development in several steps

Ms Linh Ho then introduced an automatization of the lagged variables selection, so that the models can be easily updated when new generation data become available. Our validation shows that this simple approach is good and accurate enough if one is interested in country averages. Not surprisingly, run-of-river generation is better reproduced than reservoirs generation, as the latter also depends on reservoirs management that is not modelled here. However, even reservoir generation is modelled satisfactorily. Of course, this machine learning model isn’t as accurate as a more complex and detailed hydrological model, but it provides an easy to implement solution which can be used for instance for hydro power planning or for system adequacy and extreme events assessments. Encouragingly, we have actually demonstrated that the same methodology can apply also to sub-country regions, as tested over the six bidding zones in Italy, with little loss of accuracy.

Towards an operational service

Hydro power run-of-river and reservoirs generation has been reconstructed using this approach over the entire ERA5 period, from 1979 to near real-time. It is now updated every month when new ERA5 data becomes available, in an automated way. The same model is also being applied to seasonal predictions from C3S, based on the three models from ECMWF, Météo-France and the Met Office to provide generation outlooks several months ahead, once a month. Moreover, it is applied to EURO-CORDEX climate projections, to assess how climate change may impact hydro power generation in Europe under different climate scenarios.

The full C3SE dataset will be available in the C3S Climate Data Store in the coming weeks.

A free copy of the paper is available from the Energy Journal web site.

A Historical Insight into Hydro Power Production over the past 40 years in Europe2020-04-212020-05-11https://www.wemcouncil.org/wp/wp-content/uploads/2017/01/untitled-11.pngWEMChttps://www.wemcouncil.org/wp/wp-content/uploads/2020/04/hector-emilio-gonzalez-gqkqykoqqx8-unsplash_lr-scaled.jpg200px200px
Recent Posts
Latest Tweets
Tweets by @WEMCouncil
Follow us on Social Media
Subscribe to the WEMC newsletter
Sign up to find more about our project, research and upcoming events.

Want to be informed about air pollution data during COVID-19 restrictions?Latest News, Press

Update on air pollution during COVID-19 – April dataLatest News, Press
We use cookies to ensure that we give you the best experience on our website. If you continue to use this site we will assume that you are happy with it.Ok